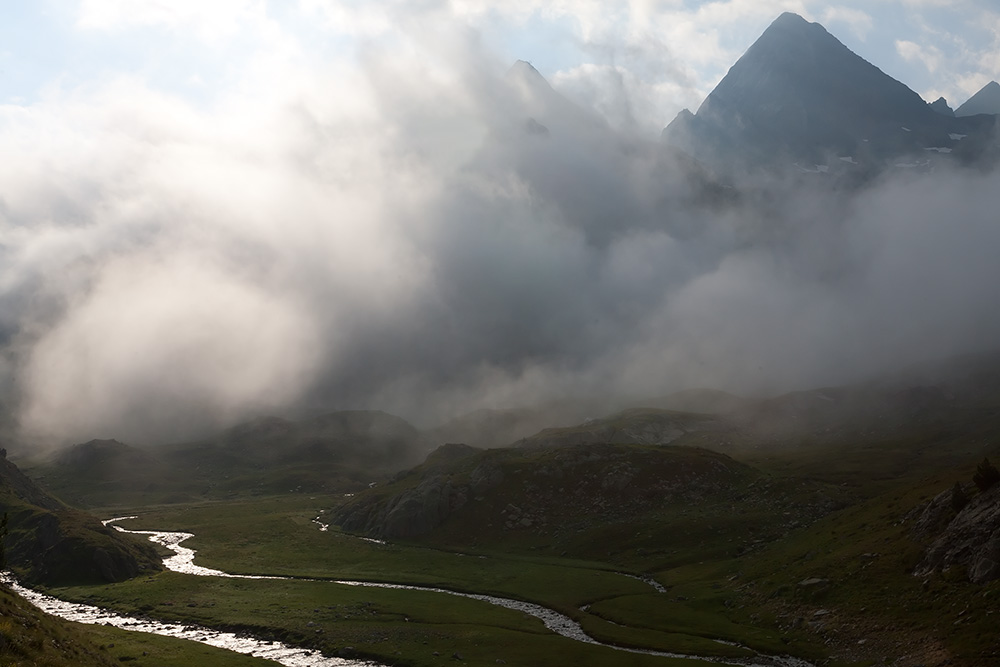 I’m interested in the way photography captures memories, which are poignant as part of a long mountain walk. The photograph shows a Spanish mountain called Teberrai. A path passes under it or go left, in the other direction, and you cross into France. I’ve done both. This view is when I set off in the morning, after camping nearby. It’s not a good idea delaying the start of a long walk. I did so however, photographing the cloud, light, and silvery river. The thirty minutes wasn’t important but you don’t know that until you finish.

The film below shows more memories. I’d had a dreadful night, emergency sleeping in a refuge after losing my tent and nearly myself in foggy darkness. Climbing above, beginning the day, I remember the last time I was there. The second part is the next day, walking down to the French town of Gavarnie, when I encountered some singing ladies. I thought they were French but they may have been Spanish. Happiness in the Pyrenees mountains. Hola! bonjour! – the message is the same.

The final film view shows my evening at a refuge called Pombie. The day had been rainy and misty and I nearly retreated to a shepherd’s hut for shelter, and never made it to Pombie. The rain was too heavy – no clothing can withstand such conditions – and had it continued I’d have been in trouble.