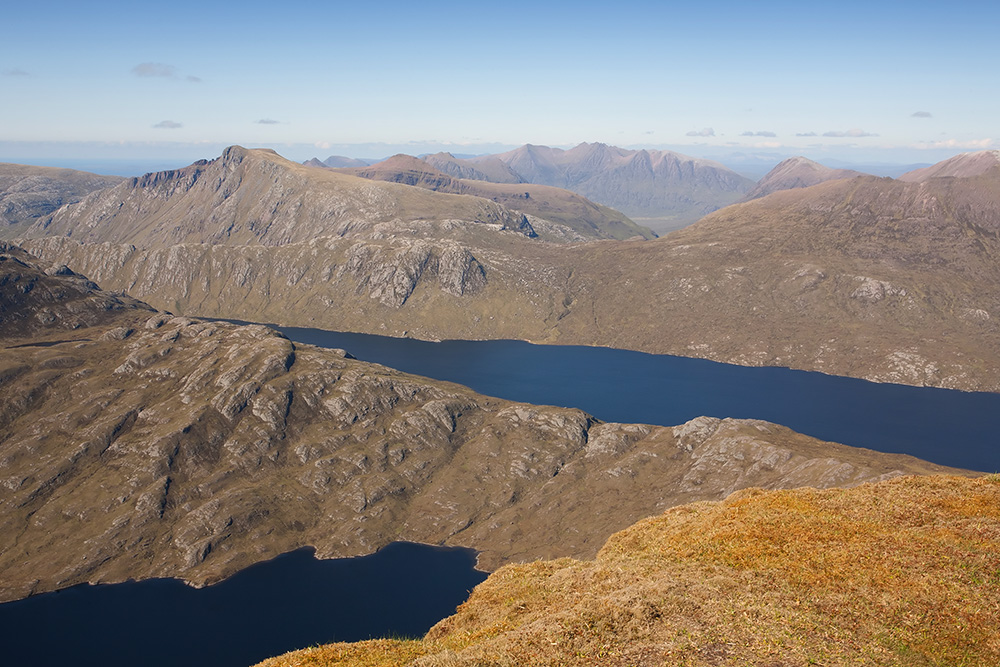 I find it heartening that we use these coded phrases as a kind of acknowledgement that we’re all in the weather together. Of course we should be preoccupied. It’s the one circumstance of life which we share in common

I’ve camped and walked in Scotland eight times and love it. Although the last occasion, because of weather, was memorably dire. I avoid bad forecasts but you get caught out. On a twelve day trip there were two decent days for walking, the rest of it drizzly with no views. For entertainment, I visited a local shop and drove around. Up and down the valley, up and down again, looking for unavailable photographs. There were long hours in my tent, cold, wet, miserable. I remember gazing up hopefully from Glen Shiel. Look, blue, will it clear up…but it didn’t.

I don’t go to Scotland in summer because of midges and winter is usually severe. This means, a short time early in the year is when I visit. Autumn perhaps, although I’ve never done it, and I met someone at the top of Slioch who said it’s usually dreich. He’d walked all the Munros, many of the islands, and was halfway through his second Munro round. Curiously, I’d met him the previous year at a camp site. We’d talked a little but nothing more. There he was again, on Slioch, and I got to know him better. We discussed reading, and he told me he avoided the photograph and opinion books. He uses the SMC manuals – Scottish Mountaineering Club – which are technically descriptive only. He didn’t want to read other people’s ideas. About Slioch for example, which I said was recommended by writer Cameron McNeish.

There was something curious and admirable about his approach, keeping it pure for himself. He didn’t tell anyone about his interest at work. No one knew about it. The mountains outside had a space inside he didn’t want spoiling. A protected space, no one goes there, like quiet hills with few people. I’m not a fan of “the outdoor industry” for related reasons. I’m not very interested in gear which is a consumerist central part of it, nor Best Pub Awards and similar. They are for sales, careers, and nonsense. The hills are for something else.

I used to like books but now make my own photographs and stories. Doing it yourself, not through others, is an important idea. It’s one of the benefits of walking, as a counterpoint against mass society which dehumanises people and mechanises experience. Marx wrote about alienation and I agree with those observations, although the imaginary historical imperative is not an answer. Society will never be perfect, or even reasonable, so my inclinations lead away not into it for peace, solace, and meaning. Walking is a balanced activity. The impulse to move has immediate effect which builds self and agency. Sometimes, in winter, dark and unpleasant, I go out just to walk.

In my early hiking years I enjoyed Lake District books. One writer in particular, Bob Allen, whose walks I followed. He described Upper Eskdale as a special and quiet place, which it is. Now I photograph and speak of it myself, having walked there perhaps twenty times, camped there three times. I walked at Upper Eskdale this summer. My trip started at Wasdale, then Eskdale, finishing at Glenridding. I wanted to visit Buttermere – another favourite area – but camp sites were full.

I’ve considered living in Scotland but don’t think I could. When I think of weather that includes light, or lack of it, as part of the far north experience. My early years were in the south of England where it’s warmer, drier, and sunnier. Although I’ve been in the north most of my life, and Manchester is not too bad compared to Scotland. Lake District weather isn’t good but if it’s a short drive you can return, go more frequently, and with less commitment.

Spring this year in Scotland was unpleasant with weeks of rain while it was fine in England. Britain as a whole is not good for weather so it’s relative. France and Spain, wonderful for the Pyrenees, then variations here. North or southern England, warm or not. West for Snowdonia, which I like, but it’s rainy. North for Scotland – but that means dreich, dark, and midges. People say we’re obsessed with weather in Britain, but it’s a battered maritime country. We have a phrase, “turned out nice again,” which often means merely dry but not sunny.

We’re entering winter and I found this video from a few years ago, reminding me how idyllic Scotland can be. This walk was like setting off in the Pyrenees. Blue sky, warm, hours of mountain scenery inside a sunlit evening.