It is only by going off the track that you get to know the country – E.M. Forster

People collect pebbles, feathers, flowers, to record their nature walks. Ferns perhaps or leaves, inserted into journals with weather notes. I tried sketches and connect better with those views compared to photographs. They are not accomplished pages, but art anyway, with interior feeling correlating picture with fact. At mundane areas not worth a photograph, but worth the time and attention. Nature outside becomes nature inside which is particularly comforting in winter. At the darkest part of the year, it reminds us of better days and the returning sun. It’s talismanic doing these things and I have talismanic walks, involving more than mountain terrain.

In March 2020 I took a local path. Like everyone else I watched the daily numbers with horror. Weeks before I was sad for Italy. At the lake near my walk, two women sat, one of them crying. The other, holding her, and both were Italian. It wasn’t only the numbers I found terrible. The tragic loss was past. The dreadful uncertainty was future. No one knew what was going to happen. I stood by the river and felt overwhelming blackness. There are stories about lost civilisations. Atlantis, supposedly a flood, might be metaphoric truth and whisper of possibility again. We are fragile underneath apparent certainties of steel, science, and cities. In mundane terms I lost a trip to Scotland. It was a glorious summery spring with early flowers and blue skies. Sandals, shorts, the best time for the Highlands. In 2018 I stayed for nearly four weeks walking, camping, driving from Glencoe to Affric, Torridon, then Mull. Spring for me means Scotland if the weather allows it.

In the pandemic year – it’s not finished but 2020 was the time of the numbers – I walked at the river. I walked at the lake. I walked at the woods. I took a camping chair and read Thomas Hardy, Mary Oliver, Solitude by Anthony Storr. It’s not pathological, he argues, but a source of creativity for artists and thinkers. In The Return of the Native Hardy says “Humanity appears upon the scene, hand in hand with trouble.” He echoes my ideas. There seems to be a dual trajectory, up or down, and people don’t agree on the orientation.

Describing landscape Hardy writes “Those who knew it well called it a path; and, while a mere visitor would have passed it unnoticed even by day, the regular haunters of the heath were at no loss for it at midnight.” Paths known to some but not others, as I sat and read in a secret place. The grass was long, trees around me, no one there. Hardy loves paths, so do I, but books for me while separated from hills. I walked the Peak District finally, the day lockdown ended. I thought perhaps not, because of crowds, but it was irresistible and I know quiet areas. I felt the joy of familiar hills, foxgloves I know, like a back garden I’ve walked fifty times.

There’s a line by Camus which is not celebratory in context, but appears so alone, which is how I like it. Autumn is a second spring with every leaf a flower. There were summer temperatures in September 2020. The outdoors was congested with vandal campers, party people not respecting the countryside. Camp sites were full, and I drive around spontaneously. In Scotland, the Lakes, Snowdonia, I’ve never booked a camp site. But wild camping is free and available. That’s the point of it, among others, so I decided on a Snowdonia escape.

Above Llyn Idwal you reach another lake and small pools. Water for food, drink, bathing, although the latter was unlikely. Daytime was warm but it was zero at night. I’d been there several times but not camped; in fact it was my first hill walking area. There was a schoolboy lunch, perpetual rain, and terrible cagoules. I arrived late, remembering the story, passed Idwal and reached the plateau as the sun was setting. I made phone snaps, sent them to a friend, then the light was gone. Enough to find a pitch but the day was over. The ground was marshy and a strong wind swept up from below. It wouldn’t curve around a corner to reach my tent beside a rock. Although it might change direction so I wasn’t entirely safe, but you never are.

Bath, bed, and tent reading with a book device is a pleasure. They’re light to hold, flip the page easily, illuminated for darkness. I’d been enjoying Hemingway at home and reached a shocking moment in my night time hills. It’s the Spanish Civil War which was primarily a battle against fascism, but with an opposing communism too. Guerrillas capture fascist government officials. To save bullets and make villagers participate, the commander creates hell. They form two lines down which the officials are forced to walk. Hacked, stabbed, clubbed, heads smashed into rocks; then thrown off a cliff. It starts slowly then becomes drunken and acrimonious. If there was a village dispute, a man disliked for his manner, anger and brutality ensue. The scene is horrifically symbolic and accurately bleak regarding mob behaviour.

In the first pandemic year I saw outdoor people become increasingly political. Lockdown energies drifted in that direction when they couldn’t walk, spliced onto the hills like ownership. You see a Kinder Protest fixation, but there were other events with parallel importance. It’s a poignant story for sure, but not because of the communism of Benny Rothman. The hills for me are a place of solace, escape, and peace. I like the gentle, philosophical, Nan Shepherd notion of “going into the mountains” not conquering them one way or another. It was half past midnight when I stopped reading in the black mountain tent blown by a wind I’d forgotten.

Hill tent mornings are joyful. Not always – walking out in rain is grim – but I’m careful with conditions. I don’t like gloomy trips with cloud, grey, and no photographs. I monitor the weather and avoid those days. So I wake, check the time, pull back the door like an animal scenting the air. Is this a good day I wonder. The wind is strong at the summits. Thick cloud moving fast, then blue sky above, it will clear. Sometimes you know.

Twisting and dressing with sleeping bag, socks, day clothes worn for the night, jacket now, so I’m warm, cold, warm, under fluttering damp nylon. The fuel in my bottle is old and won’t ignite which means no coffee. Awful, walking and camping, when the pleasure is amplified and you need energy and fluids. I want it now but there will be coffee again. I step outside and the day begins. Cloud in the valley. Sunrise over the hills. 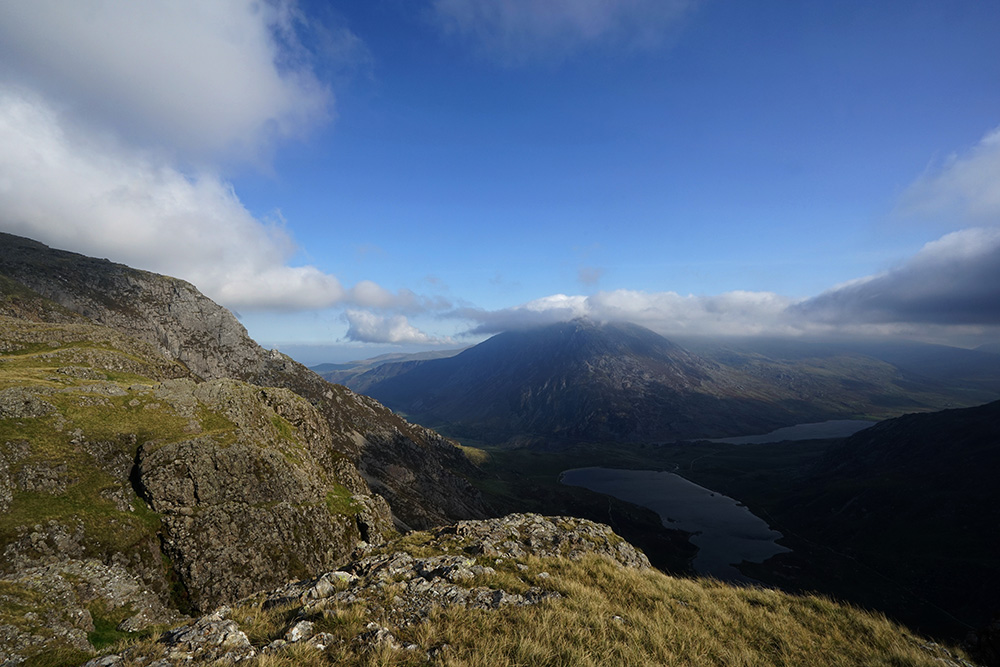